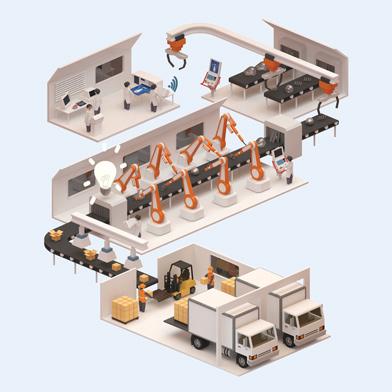 A couple of recent MIT articles clearly lay out the direction of manufacturing which must drive multi-year IT Plans.  Patterns of success are proving that technology is increasingly essential to manufacturers who may have traditionally minimized the contribution of IT.  Leading manufacturers are using the Internet of Things, automation, and collaboration to drive co-creation which yields innovation.

It is likely that your senior leadership team sees the same thing and hopefully, because of your leadership, is not asking themselves how to get there and who will lead.

The Rise of the Machine

MIT starts in Germany where, "despite relatively high wages, long vacations, and strong labor laws and regulations, Germany remains a global leader in many manufacturing sectors. Last year, automotive and industrial exports helped the country post a record trade surplus of 198.9 billion euros ($269 billion). One reason: automation. Contemporary German auto manufacturing exploits advanced manufacturing technologies to increase productivity and profits. As a result, manufacturing employment has dropped. Between 1970 and 2012, the proportion of German employment in manufacturing fell by half, to around 20 percent (nearly double the U.S. share)."

Despite all that is against Germany, including disadvantages worse than the U.S., they thrive.

In an article called "Making Innovation" they advise "manufacturing no longer derives its importance primarily from employing large numbers of people. As software drives more of the manufacturing process, and automated machines and robots execute much of it, factories don’t need as many workers."

The Result is Local Innovation

The researchers at MIT observe that innovation will follow manufacturing.  "the idea popularized in the 1990s and 2000s that innovation can happen in one place (say, Silicon Valley) while manufacturing happens in another (such as China) is not broadly sustainable. If all the manufacturing is happening in China, these networks are growing there, meaning eventually all the innovation—or at least a lot of it—will be happening there too."

They continue "advanced manufacturers thrive best in an ecosystem of suppliers and experienced talent. For this reason, specialized manufacturing networks have taken hold in many regions. Among the success stories highlighted in this report are China’s dominance as a manufacturer of consumer electronics, Germany’s lead in precision tooling and robotics, the United States’ strength in aerospace and car manufacturing, and its role in pushing forward important new manufacturing technologies."

The impact and considerations for manufacturing locations is evolving.  Labor costs in traditionally low cost countries are rising and the percentage of labor in manufacturing is decreasing.  Highly developed countries are adapting to these realities and winning.

At the same time, where manufacturing takes place will become the location where innovation grows.

A trend toward higher technology in manufacturing is evident.  IT infrastructure must precede the deployment of locations and capability.  Therefore it is incumbent on IT to be "where the puck will be," to quote Wayne Gretzky.